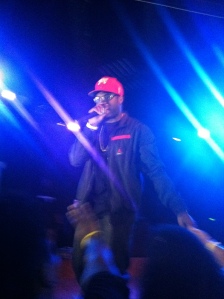 A couple of weeks ago, I went on a thought spree/twitter rant about Jesus and secular music. The dilema of determining what I shouldn’t listen to because of my faith is nothing new. I’ve written about it before, and came to the conclusion that it comes down to being a matter of my heart. Since then, I’ve cut many an artist from my rotation. I thought that I’d miss the old music, but it was a surprisingly easy process. The good thing about cutting out old music is that there was more room for new music! Ok, let me get to the point.

I did an experiment a few weeks ago. Warm weather means concert season in Nashville, and I’m a sucker for a live show. However, the environment at most hip-hop concerts aren’t cut from the pages of a storybook. I’m not going to lie and say that I didn’t enjoy myself last spring/summer. So much so that once the cold months came I decided to become a hermit indefinitely. Now that the sun is heating things up, I’ve realized that I’m not meant to be in the house. AT ALL. I want the sun. I want the crowds and people watching. I want the bands and amazing voices. I want it all. But can I have it all and not go left? Or will being in the live show environment make me want to repeat previous years of wilding out? Perfect test was the Big KRIT show. 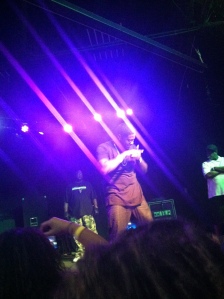 I love me some KRIT. LOVE. He’s a great mix of ratchet and intelligence. He raps about what he knows and it’s genuine. No, his songs aren’t about God. Yes, there is plenty of profanity. Do I feel some kind of way when I listen to him? No. Like I said before, it’s all about the heart. I’ve been to a few KRIT shows in my day. I think that this one was my fourth. And let me tell you…. I had a BALL! Did I drink? No. Did I identify with what everyone was talking about in every song? Not at all, but I never have. Did I get sleepy and leave early? Yes. I have to work every morning at 7am. No way that I can hang when the headliner doesn’t even hit the stage until after midnight. 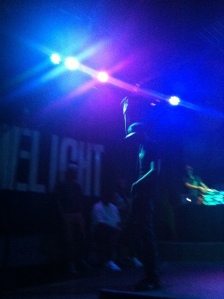 This is pretty much the dopest picture of Open Mic ever. Don’t debate me.

I came out of this experiment knowing a few things for sure. OpenMic is amazing and I’m impatiently waiting on FTR2. Petty has this thing about him that’s infectious. I can’t really describe it, but I promise you can’t sit through his set and not vibe with him. He’s had me since I thought he was a random white boy at the AyeVee show. I was so wrong (he’s black). Big KRIT has never disappointed and I don’t believe he ever will. Most importantly, I know that my doubts and agonizing were for no reason. Honestly, I can go into any show on this planet and be just fine as long as my foundation is strong. I know I’m still going to hear the “Watch what you feed your spirit. Be careful of the places that you go, you’re a Christian” speeches. I’ve never believed that my God is one to take away things that we love when we choose to live for Him. He doesn’t want us to lead boring monotonous lives. So catch me at your favorite venue. In the middle of the crowd. Falling totally in love with someone’s performance. Matter of fact, join me!